The Placenta, Its Membranes, and the Umbilical Cord

The human placenta is a highly sophisticated organ of interface between mother and fetus, often
referred to as the “gate-keeper to the fetus.” Careful examination of the placenta, its membranes,
and the umbilical cord can prove to be a valuable aid in the diagnosis and treatment of the
neonate. Gross examination of the placenta takes five minutes, and more sophisticated examination
should be considered when there is poor pregnancy outcome, recognizable malformations or
abnormalities, multiple gestation, extremes of amniotic fluid volume, severe intrauterine growth
retardation, short umbilical cord (< 32 cm), and profound acidemia.
The maternal surface of the placenta (decidual plate) is soft, spongy and dark red; and the fetal surface (chorionic plate) is shiny and steel blue to gray.
The placenta, membranes, and umbilical cord weigh approximately 400 to 600 g at birth.

Abnormalities in structure can result in an inefficient transport of oxygen and nutrients to the developing baby. Despite this importance, it is one of the least understood and investigated human organs. 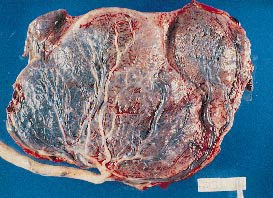 A succenturiate (accessory) lobe is common and has no effect on the fetus. This occurs in about 3 to 5% of deliveries.  Its importance arises from the fact that it may be retained within the uterus and cause postpartum bleeding. 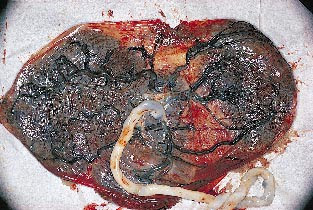 Fetal surface of a bipartite or bilobed placenta (placenta duplex). The two parts of the placenta
are of nearly equal size and this occurs in about 1% of deliveries. Note that the lobes are separated by membranes. The umbilical cord may insert into one or other lobe, or may insert between the two. 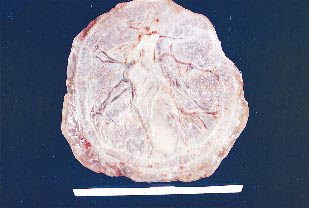 In a circumvallate (circummarginate) placenta the fetal surface may be reduced if decidual tissue has made its way between the amnion and chorion. This appears as a yellow, peripheral, hyalinized fold circumscribing the edge of the chorionic plate. This type of placenta has been reported to be a cause of antepartum bleeding and premature labor 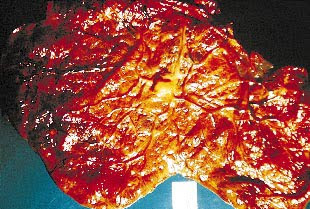 This is an example of placenta membranacea (placenta diffusa). These placentas are rare. The ovum implants too deeply, the villae of the chorion fail to regress, and the placental tissue develops over the entire surface of the chorion. The placenta is very thin and is associated with poor fetal growth and antepartum hemorrhage. There may be previa type bleeding.

Fungal infection of the nails has been classified into four types :

1. White superficial onychomycosis presents with diffuse or speckled white discoloration of the surface of the toenails. It is caused primarily by Trichophyton mentagrophytes, which invades the nail plate. The organism may be scraped off the nail plate with a blade, but treatment is best accomplished by the addition of a topical azole antifungal agent. 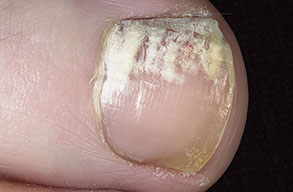 2. Distal subungual onychomycosis presents with foci of onycholysis under the distal nail plate or along the lateral nail groove, followed by development of hyperkeratosis and yellow-brown discoloration. The process extends proximally, resulting in nail plate thicken and separation from the nail bed. Trichophyton rubrum and, occasionally, T. mentagrophytes infect the toenails; fingernail disease is almost exclusively due to T. rubrum, which may be associated with superficial scaling of the plantar surface of the feet and often of one hand. These dermatophytes are found most readily at the most proximal area of the nail bed or adjacent ventral portion of the nail plates that are involved. Topical therapies such as ciclopirox 8% lacquer may be effective for solitary nail infection. Because of their long half-life in the nail, terbinafine or itraconazole may be effective when given as pulse therapy (1 wk of each mo for 3–4 mo). Either agent is superior to griseofulvin, fluconazole, orketoconazole. The risks, the most concerning of which is hepatic toxicity, and costs of oral therapy must be weighed carefully against the benefits of treatment for a condition that generally causes only cosmetic problems. 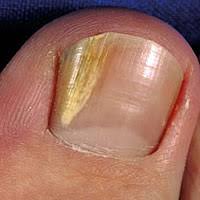 Email ThisBlogThis!Share to TwitterShare to FacebookShare to Pinterest
Labels: Dermatology

Screening and Diagnosis of Celiac Diseases

Screening for celiac disease has been recommended for specific risk factors.

The anti-endomysium IgA antibody test is an immunofluorescent technique and is relatively expensive; interpretation is operator dependent and prone to errors so that it has largely been replaced by anti-tissue transglutaminase IgA antibody tests, which are simpler to perform and have similar sensitivity and specificity.

Anti-gliadin IgA and IgG and anti-reticulin IgA antibody tests are no longer recommended tests due to lack of specificity.

The anti-endomysium IgA and anti-tissue transglutaminase IgA antibody test can be falsely negative with IgA deficiency, which is associated with an increased incidence of celiac disease. Measurement of serum IgA concentration is mandatory to assure that false-negative results in IgA-deficient individuals are excluded. If celiac disease is suspected in patients with IgA deficiency, intestinal biopsy may be required. Because screening with antibodies may identify patients without documented celiac disease on biopsy, it is important to set the lower limit of antibody titers high enough to avoid false-positive results.

A. Normal
B. Celiac disease

Email ThisBlogThis!Share to TwitterShare to FacebookShare to Pinterest
Labels: Pathology

Some Limb Deformities in a Newborn 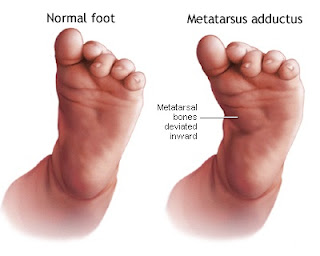 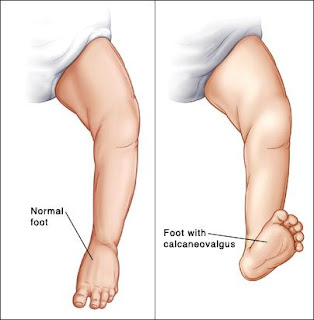 3. Talipes equinovarus. Talipes equinovarus, or club foot, has an incidence of approximately 1.5 in 1,000. Fifty percent of the time, the condition is bilateral. It can be associated with other conditions such as spina bifida and arthrogryposis. The foot turns inward and downward and remains tight in this position. Talipes equinovarus requires immediate evaluation since the timing of corrective casting, if necessary, can affect optimal outcome.
Read more »
Posted by Ibrahim Hossain at 10:50:00 PM 9 comments:

Email ThisBlogThis!Share to TwitterShare to FacebookShare to Pinterest
Labels: Pediatrics

A 55 Year Old Man Presents To Emergency With Chest Pain For 6 Hours...

The ECG shown below was recorded in the A & E department from a 55-year-old man who had had chest pain at rest for 6 hours. There were no abnormal physical findings.
What does the trace show, and how would you manage him? 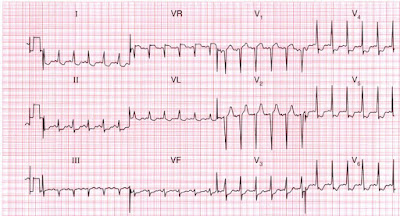 Email ThisBlogThis!Share to TwitterShare to FacebookShare to Pinterest
Labels: Cardiology

Important Clinical Findings In The Tympanic Membrane and Middle Ear

“Chalk” patches. White areas of tympanosclerosis are common findings on examination of the ear drum. They are of little significance in themselves, and the hearing is often normal.

A past history of otorrhea in childhood or grommet insertion is usual. Chalk patches do occur with no
apparent past otitis media. Extensive tympanosclerosis with a rigid drum is a sequela of past otitis media, and the ossicles, too, may be fixed or noncontinuous.

Scarring of the drum. A gossamer-thin membrane can be seen to close this previously well-defined central perforation (arrow).

At first sight with the auriscope, a central perforation would appear to be the diagnosis; more careful
examination with a pneumatic otoscope will show that this thin membrane moves and seals the defect, giving reassurance that the drum is intact.

Scarring of the drum with retraction onto the round window, promontory, and incus is also evidence of past otitis media.

It is sometimes difficult to be sure whether this type of drum is intact; a thin layer of epithelium indrawn onto the middle-ear structures may seal the middle ear, and examination with the operating
microscope may be necessary to be certain of an intact drum.

A retracted tympanic membrane which is thin and indrawn onto the long process of the incus (a), head of the stapes (b), promontary (c), and round window (d).

The stapedius tendon is also seen in this panoramic view obtained with a fiberoptic endoscope.